Giveaway: Waking Up in the Land of Glitter 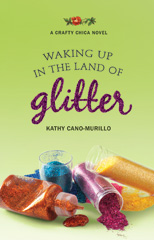 Waking Up in the Land of Glitter: A Crafty Chica Novel by Kathy Cano-Murillo is a fun book about a woman finding her place in life, with friends and crafts along the way.  For more information, see my review.

Hachette Books is allowing me to host a giveaway for 3 copies of Waking Up in the Land of Glitter!

Having an address (not a PO Box) in the US or Canada is a requirement. I’ll pick the winners on the evening of April 2.

While you are waiting to see if you won, go to the Crafty Chica web site for some crafty fun!

Review: Waking Up in the Land of Glitter: A Crafty Chica Novel by Kathy Cano-Murillo

Check out my giveaway for  3 copies of Waking Up in the Land of Glitter!

Waking Up in the Land of Glitter is a book that I have a hard time being objective about– both my positives and negatives are largely personal.

This is a relatively light book, the story of a woman figuring out who she is, and exploring crafts along the way.

With glue guns, glitter, twigs, or yarn, the ordinary can become extraordinary . . . especially at La Pachanga. Owned by Estrella “Star” Esteban’s family, the restaurant has a rep for two things: good food and great art. La Pachanga brings people together-even when it looks like they couldn’t be further apart.

One ill-fated evening, Star jeopardizes her family’s business, her relationship with her boyfriend, and her future career. To redeem herself, she agrees to participate in a national craft competition, teaming up with her best friend, Ofelia-a secretly troubled mother whose love for crafting borders on obsession-and local celebrity Chloe Chavez-a determined television personality with more than one skeleton in her professional closet. If these unlikely allies can set aside their differences, they’ll find strength they never knew they had, and learn that friendship, like crafting, is truly an art form.

In the end, I enjoyed the book, even while being somewhat disappointed in some aspects of it. I’ll look for the author’s craft books at the bookstore– they sound like fun to flip through, and I could imagine taking one home with me. I hope she writes another novel– I’d certainly pick it up, whether it has the same characters or a whole new cast.

If you’d like to give this book a try, check out my giveaway for  3 copies of Waking Up in the Land of Glitter! You can also get a copy at Amazon, or most likely at your local bookstore.

I read this book as part of a Blog Tour for Hachette Book Group.  They provided my copy of the book so I could provide this review.

For other reviews, check out