RSS
← Review: Beautiful Creatures by Kami Garcia and Margaret Stohl
Mini Review: To Sin With A Scoundrel by Cara Elliott → 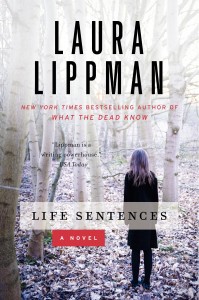 To me, Life Sentences was a strong 4 star book bogged down by trappings that didn’t work for me.

Author Cassandra Fallows has achieved remarkable success by baring her life on the page. Her two widely popular memoirs continue to sell briskly, acclaimed for their brutal, unexpurgated candor about friends, family, lovers—and herself. But now, after a singularly unsuccessful stab at fiction, Cassandra believes she may have found the story that will enable her triumphant return to nonfiction.

When Cassandra was a girl, growing up in a racially diverse middle-class neighborhood in Baltimore, her best friends were all black: elegant, privileged Donna; sharp, shrewd Tisha; wild and worldly Fatima. A fifth girl orbited their world—a shy, quiet, unobtrusive child named Calliope Jenkins—who, years later, would be accused of killing her infant son. Yet the boy’s body was never found and Calliope’s unrelenting silence on the subject forced a judge to jail her for contempt. For seven years, Calliope refused to speak and the court was finally forced to let her go. Cassandra believes this still unsolved real-life mystery, largely unknown outside Baltimore, could be her next bestseller.

But her homecoming and latest journey into the past will not be welcomed by everyone, especially by her former friends, who are unimpressed with Cassandra’s success—and are insistent on their own version of their shared history. And by delving too deeply into Calliope’s dark secrets, Cassandra may inadvertently unearth a few of her own—forcing her to reexamine the memories she holds most precious, as the stark light of truth illuminates a mother’s pain, a father’s betrayal . . . and what really transpired on a terrible day that changed not only a family but an entire country.

I really liked the plot and the main character, and the look at her relationships with her parents and with her childhood friends.

The mystery was interesting and (mostly) well plotted and revealed. The question was whether Cassandra’s childhood friend Calliope really killed her child, and if so, why?

I’ve read several books recently featuring writers as characters, and I’ve been enjoying them. Cassandra is no exception. I enjoyed her reflections on her past, present and future and how they interrelate. Her approach to investigation also worked well for me in the story.

The other characters were overall a neutral for me. They were at times compelling and at others overdrawn. In general they didn’t pull me out the story, and so I could forgive them more flaws than I noticed.

The problems I had with the book had to do with the delivery. It felt to me there was an effort to be Literary, and it distracted from the story.

A prime example of this was the wandering point of view. When done well, I like when I’m shown what different characters are thinking and feeling about the events in a book. I did like that aspect of Life Sentences, although I sometimes had to pull myself out of the story to figure out who a particular chapter was focusing on.

What I didn’t get were the shifts between first and third person. I’m left with the feeling that I should go back and figure out why the POV shifted when it did, and what it meant. When reading, I found it distracted me from the story.

I had one issue with the story.  There was a fact that was flagged multiple time as being Very Important to the story.  Characters would point this out, and it would be key to getting cooperation, or understanding what to do next.

I never understood the relevance.   The book was well plotted enough that I think the meaning was there.  Either it was too cloaked in the delivery or I was too clueless to pick it up– take your pick.

I enjoyed the book as a mystery and a character study.  I just wish I hadn’t been pulled away from those as much as I was.

I’m definitely interested in reading more of Laura Lippman’s books.  If you are as well, check out the Laura Lippman reading challenge at Hey Lady! Watcha Readin’?.  I’m considering it myself!

Part of what convinced me I want to read more was Laura Lippman’s Website.  I suspect her Tess Monaghan books will be just my style :-).

I read Life Sentences as part of a TLC Book Tour. Thank you to Trish for the book and the opportunity participate.

For other perspectives on the book, check out the other tour stops:

← Review: Beautiful Creatures by Kami Garcia and Margaret Stohl
Mini Review: To Sin With A Scoundrel by Cara Elliott →