Lena Duchannes is unlike anyone the small Southern town of Gatlin has ever seen, and she’s struggling to conceal her power and a curse that has haunted her family for generations. But even within the overgrown gardens, murky swamps, and crumbling graveyards of the forgotten South, a secret cannot stay hidden forever.

Ethan Wate, who has been counting the months until he can escape from Gatlin, is haunted by dreams of a beautiful girl he has never met. When Lena moves into the town’s oldest and most infamous plantation, Ethan is inexplicably drawn to her and determined to uncover the connection between them.

In a town with no surprises, one secret could change everything.

When reading this, I actually regretted having read Twilight.  Don’t get me wrong– I enjoyed Twilight, even while recognizing its flaws.

Unfortunately, my time reading Beautiful Creatures was spent thinking how much better it was than Twilight. I do think that BC was better written, and I’m sorry that I was distracted from its world by these thoughts.

For me, the biggest strength of Beautiful Creatures were the two main characters. They were both honestly teenage without being obnoxious, or at least only occasionally annoying. Both Ethan and Lena had enough depth to be interesting.

The secondary characters were good, if mostly a little shallowly written. They covered enough variety to make up for that!

I also was intrigued by the magical world, with a mythology not directly related to any other I’ve encountered. Working withing an existing mythology isn’t a problem for me, but I liked the creativity of this one, particularly since it seemed well thought through.

The other thing that stood out to me while reading was how some of the common conventions of YA paranormal romances were turned on their heads– the primary example being the normal male teen and the powerful supernatural female teen!

This wasn’t a deep read, but it was a fun one.  I’m very eagerly awaiting the next book. 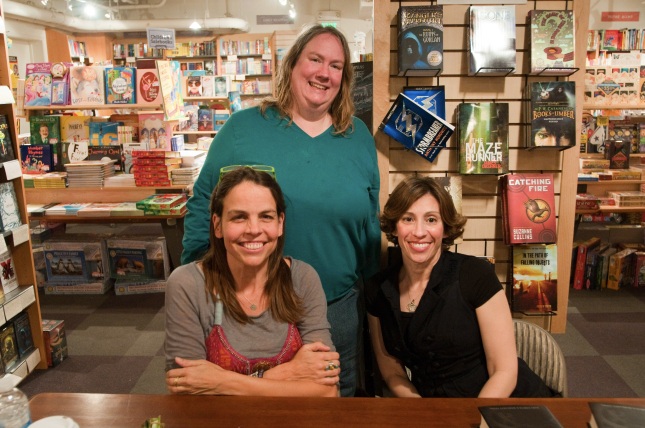 Thanks to Pam at Bookalicious, I went to see the authors at Books Inc. in Palo Alto a few weeks ago– I really need to keep an eye on the schedules of the bookstores that have events like this.

The evening was a blast!  Both women were a lots of fun, and I really enjoyed the background on how Beautiful Creatures came into existence.  Whether or not you’ve read the book, you should go see these ladies if you have the chance.

If you haven’t already, go check out the next book, Beautiful Darkness.  I love that cover!